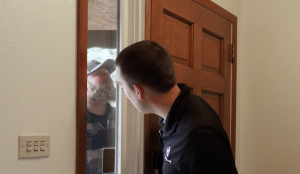 Texarkana, Arkansas — A fatal shooting occurred this past Monday evening at the Park Ridge Apartments on Price Lane at approximately 2030, local time. Initial reports suggest that the man who was shot forced his way inside the apartment where his estranged wife lived, and began to assault her and another man with a knife.

The estranged wife then retrieved her firearm and shot the man, Courtland Luckey, several times. Reports also show that there were two children in the apartment who were not hurt. The relationship between the children and Luckey is not known at this time.

The other, unnamed man who was attacked with the knife was brought to the hospital where he was treated for severe injuries from the knife attack. Reports indicate that the man will be okay.

When police arrived on scene they found the man with multiple gun shot wounds and attempted to render life saving aid to the man. But he was later pronounced dead on the scene.

Reports indicate that this case will be given to the prosecutor to decide if any charges need to be filed after the investigation has been completed.

The home is often broken into by vandals and those who’d wish to do you harm. The best defense is actually to ensure you don’t become a victim to begin with. We recommend our Home Defense Course that walks you through each stage of the home defense strategy from keeping criminals out to the best of your ability, to the guns you’d choose to defend your castle, to the steps you’d take once the bad guys are inside.

You can find this course, here.